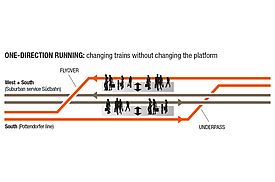 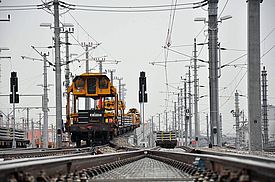 The construction of a flyover, for the main line to pass over the suburban lines at the new Vienna central station Wiener Hauptbahnhof, was a challenging task for the SUZ 500 high-speed track relaying train of SWIETELSKY Baugesellschaft m.b.H.

With this flyover, a direct main line has been built that allows trains to run directly from South to North on a dedicated line, without the need to pass over turnouts or crossings. The tracks of the extended Pottendorfer line will run uninterruptedly from Wien-Meidling to Wien-Hauptbahnhof.

This will make traffic management considerably easier and increase the safety on the line that will have to cope with 60 to 65 trains per day in 2015. Moreover, the traffic volume at the flyover will further increase once the Pottendorfer line has been upgraded to double track. 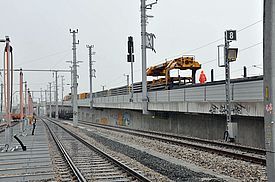 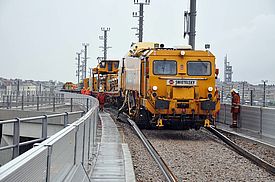 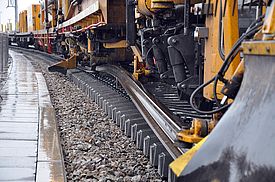 The track was laid on the flyover on 30th August 2014. On the first 400 metres of the ramp (on the station side) the track has a gradient of 25 ‰, it then runs through two curves over the other tracks and then descends over a length of 260 metres with a gradient of 35 ‰. The total length of this new section is 971 metres and at the highest point it rises 9.35 metres. The smallest radius is 656 metres, and the biggest 2,600 metres with a maximum of 80 mm superelevation.

A main line with a gradient exceeding 25 ‰ (1:40) is defined as line with steep gradient. However, these gradients do not pose an obstacle for the high-speed track relaying train. The machine driven by a crawler track undercarriage travelling on the ballast, easily manages uphill and downhill gradients.

Using the SUZ 500 high-speed track relaying train track is laid by a continuous assembly-line method. On this worksite, the new rails were pre-deposited next to the tracks. The new sleepers were supplied from the rear solely over the newly laid track.

For the gantry units running on the sleeper wagons and the machines, the enormous gradient was certainly a challenge. Maximum performance was required from the small undercarriages. As the operation showed, this was no problem - even in persistent rain.

The absolutely accurate and automatic laying of the sleepers, as well as the installation of the new rails, went like clockwork - in one shift of about four hours almost 1,000 metres of track were laid.

We use cookies to provide an optimized usage experience. By using www.plasserindia.com you agree to the usage of cookies. learn more