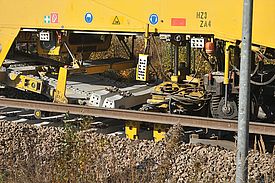 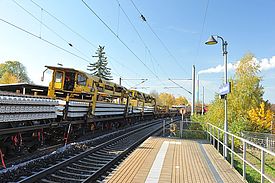 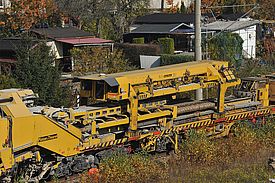 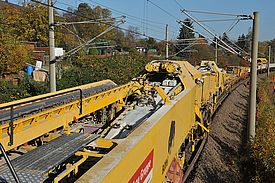 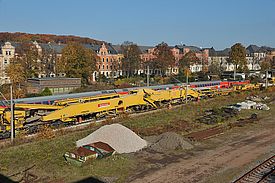 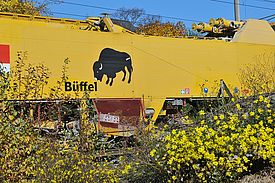 Near Chemnitz/Germany concrete sleepers had to be replaced. A job done by the SUM 315 of DB Bahnbau, which features an output of roughly 2,000 metres per shift and the capability of laying two sleepers at a time.

Its performance and speed never fail to impress once team and machine are well acquainted with one another.

Called “SUM 315” by DB Bahnbau, the high-capacity track renewal machine was handed over in July 2010 and nicknamed “buffalo”. DB Bahnbau exchanged the sleepers between Chemnitz and Niederwiesa in October/November 2015 as the old concrete sleepers had reached the end of their service life on a track length of 7,105 metres. This necessitated “track renewal without rail renewal”, a procedure where rails and ballast are reinserted and alignment and gradients remain unchanged.

Replacement of sleepers, a simple job for the all-rounder.

Replacement is fast with the “buffalo”, which enables outputs of up to 2,000 metres per shift. In sleeper replacement the removed ballast will be stored only temporarily. However, the first step is to thread in the excavating chain. Cutting and lifting the rails – no problem. Immediately, the renewal train moves forward and is ready for operation. For our crew of ten, who are familiar with the machine’s features, threading the chain in or out is only a matter of minutes.

The SUM 315 always lays two sleepers simultaneously. The new sleepers are fed in pairs as well, thus making full use of the clearance gauge. Prior to placement, the sleepers are rotated by 90°. Every step is perfected. The gantry unit that feeds the new sleepers also picks up a set of old sleepers collected for the return path. Once the used sleepers arrive at the transport wagon, they are taken over by a second gantry system. Journey paths and times will thus become much shorter, while total output increases. The wagons supplying new sleepers and those carting away the old sleepers will always move towards and away from the front end of the machine in the direction of work to the SUM units. Directly behind the SUM 315, the track is ready for the first tamping cycle.

We use cookies to provide an optimized usage experience. By using www.plasserindia.com you agree to the usage of cookies. learn more